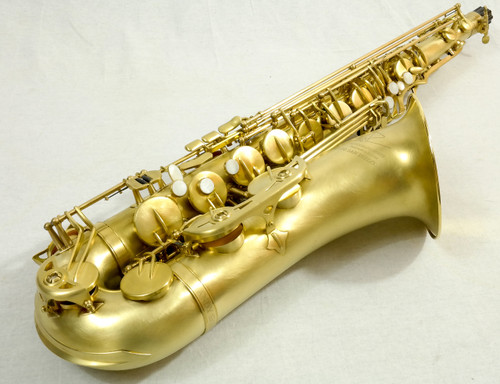 Conception:
The initial concept came over a coffee in Bristol, between international sax artist Andy Sheppard and saxophonist/product specialist Andy Brush. The conversation turned to Andy's desire for a sax that was as close to "the perfect horn" as possible. With so many great horns on the market, this "perfect" sax would therefore have to be something very special indeed.
Andy Brush approached award winning saxophone manufacturers Worldwind Music with the concept in 2010. Worldwind were understandably excited about the project and arranged for a three way meeting between Andy Sheppard, Andy Brush and Worldwind Music's technical manager Dave Farley, the designer and builder of the professional Trevor James Signature Custom RAW saxophones. With everybody wanting to drive the project quickly forward, it was a matter of only 8 weeks later that the first prototype instrument was ready.

Process:
Andy play tested and recorded on the prototype for a few weeks, making notes about the positive performance areas as well as the areas for improvement. Six weeks later a second promising prototype was built, however analysing a soundcheck at Ronnie Scott's Jazz Club in London, Andy felt that the sax wasn't "quite speaking enough". Reviewing the recordings, it was agreed that the neck and bell would be the next areas for modification and a process of experimentation with different neck angles and gauge material began. Two months later, prototype three was now in Andy's hands and being put through a rigorous recording studio test. The "perfect" sax was nearing perfection. A closer inspection of the ergonomics of the sax led to various keys being repositioned to give even more comfort and playability along with further modifications to the interior of the neck and placement of the octave lever to facilitate more resonance and response. In Andy's own words, the third version of this horn was "98% there".
It was six weeks later when the fourth prototype was driven down to Andy's recording studio for approval. Upon arrival in Bristol, Andy took the sax out of it's case, played it for 10 minutes and simply looked up and smiled. "We've got it" were the only words needed!

Result:
Anyone familiar with Andy Sheppard will know of his reputation for playing uniquely refined and beautiful music with an instantly recognisable sound. In creating a saxophone bearing his name, the bottom line from the outset was to dispense with the modern different finishes options and gimmicky mechanism additions in favour of keeping the instrument totally focused on it's sound, the highest quality tubing, pins, rods, screws and build quality. This instrument has returned the saxophone back to its roots and gives Andy complete freedom of expression and performance.
Andy puts his signature on the bell of this incredible saxophone as a seal of approval that the Andy Sheppard Autograph Series tenor is of the highest quality craftsmanship. All are hand built and finished in Lenham, Kent by Dave Farley of Worldwind Music. Only 100 of these tenor saxophones will be built and each will be individually numbered and engraved with a different favourite World city where Andy has performed.

Ordering:
These saxophones are strictly limited edition and are individually engraved. Please contact us if you wish to order one of these saxes. We will contact Dave Farley and provide you with a list of the cities and serial numbers that are available. After taking a deposit we will order your chosen sax. The engraving and final set up of the saxophone takes around 4/5weeks and we will keep you informed of the progress at all times. Once we recieve the sax we can then arrange collection or shipping.
Please note that the photos on this page are of the San Diego model which has been sold and therefore this city is no longer available.

All of our instruments are individually set up, tested and adjusted to perfection, prior to sale by our on site technicians.

Get the latest updates on new products and upcoming sales